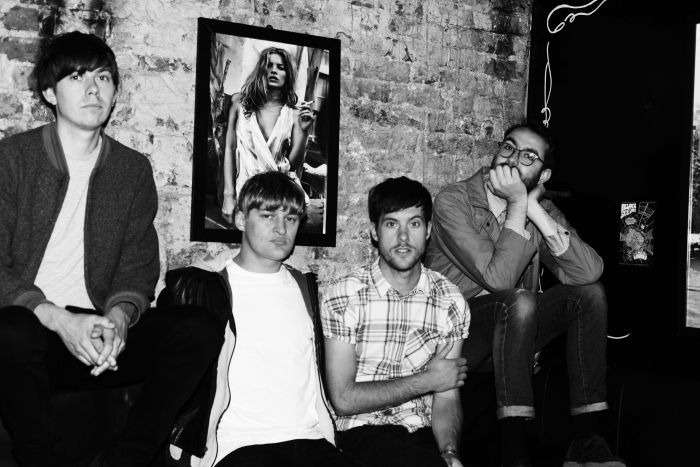 Best friends from school and college, Life In Film formed in Hackney, East London when they moved in together and started writing songs. The guys – Samuel Fry (vocals/guitars), Edward Ibbotson (guitars), Dominic Sennett (bass) and Micky Osment (drums) – have cemented their status as a rousing live band with a string of sold out dates across the U.K and Europe.

“When we started we thought it’d be like The Beatles in Help! [the 1965 film] when they all lived next door to each other and wrote music,” jokes Fry. “And it was similar, just without the success!”

Their highly anticipated debut album looks set to change that. A collection of modern indie-pop songs that fuse a blues sentiment with upbeat melodies, introspective lyrics, bright guitars, and catchy hooks, Life In Film chose legendary producer Stephen Street (The Smiths, Morrissey, Blur, Babyshambles, The Kaiser Chiefs) to helm the record, not just for his credentials but also for his emotional sensibility and musical intuition.

Though they confess they simply “fell together”, Life In Film’s journey from four friends knocking about musical ideas to slick indie-pop band began when they were just kids. Ibbotson started tinkering on guitar when he was nine years old, as did Sennett, though after snapping a string and fretting he’d broken the instrument, he hid his guitar in a closet for twelve months. Upon realizing strings were replaceable, he rekindled his love, eventually mastering the bass.

Life In Film’s early rehearsals saw Fry behind the drum kit, but when Sennett noted that the group needed a singer, Fry took on lead vocal duties (which, according to Sennett, “is a good thing, as he’s lousy on the drums”). Osment’s skill as a drummer gave Life In Film its strong, rhythmic direction, and has even raised a few eyebrows: a fan’s perplexed drum teacher told him the beat Osment plays on “The Idiot” was impossible to play and must have been double tracked. It wasn’t.

The friendship between the four is at the heart of Life In Film, and they say their closeness allows them to be completely honest with each other and write songs that they all have an emotional connection to.

Asking them to describe one another prompts raucous laughter, but they agree that Sennett is the band’s eccentric and can be incredibly stubborn, while Fry is strong willed, independent and level headed. Osment is unanimously voted the band’s “nice guy” whose focus keeps the other three grounded, while Osment describes Ibbotson as “disorganized and slightly away with the fairies but very creative.”

“Most of the time we like to make a lot of noise and have a laugh,” says Fry, “but we can all be pretty reflective in our own ways.”

Though comparisons to other bands have followed Life In Film since their infancy, they say their inspirations are broad and not necessarily limited to other music. Instead, their songs are inspired by what excites them about life and living in a city as culturally and artistically diverse as London, as well as the ups and downs of relationships.

Effortlessly carving a niche in London’s musical landscape with their combination of catchy pop songs and earnest ballads, the band’s music blurs genres but always sounds inherently like Life In Film, or, as they say, “it always has our Life In Film stamp firmly on it.”

When it comes to lyrical content, Fry and Ibbotson wear their hearts on their sleeves without ever becoming too sentimental, explaining that their lyrics relate to relationships and significant events. That is not to say, though, that there are not more melancholic moments on the album; there is the cinematic “Carla” and wistful ballad “Anna (Please Don’t Go)”, which Ibbotson wrote after a break up and says is about “trying to reassure the protagonist that everything will work itself out.”

Life In Film’s songwriting process is fluid and collaborative, and while they occasionally present completed songs to one another, they say jamming and bouncing ideas around tends to work best. They cite “Get Closer”- written over the course of a few hours in their flat one summer and evolving from a loose melody Ibbotson was tinkering with – as one of the best examples of their organic writing style.

Though they’ve spent countless hours writing, recording and touring together, they’re more likely to finish each others sentences than argue, and insist their different personalities are what make them work so well together. And, they all agree, the focus is always on the music.

“A good song will always be about a strong melody and a story worth telling,” says Ibbotson.

“As long as we can do that in our own way I think we will fit in anywhere.”